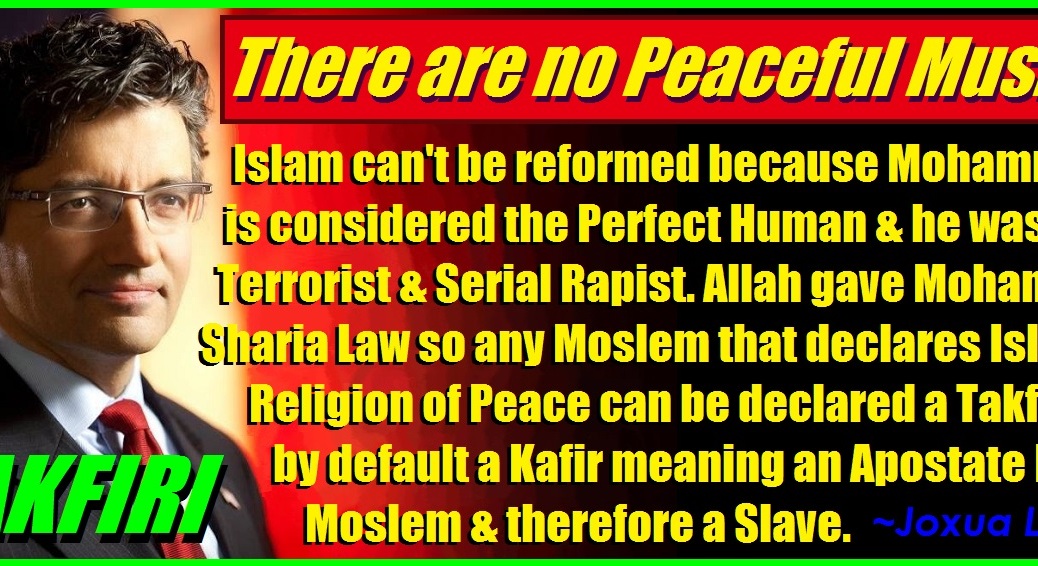 I am pretty sure you remember me, you blocked me on Twitter when you refused to debate me and you were challenging Donald Trump to debate with you about Islam.  I also called into that Canadian Radio show after they had you on as a guest and the biased moron deleted our conversation from the transcript. Since you are too much of an Intellectual Coward to talk to me like a man, I will state my case openly in public for all to see.  This is the Truth about Islam that you and all of the so-called “Peaceful Moslems” are avoiding & concealing and in doing so you are actively enabling the “Moslem Extremist Terrorists” but we both know they aren’t really Extremists, unless you are willing to argue that Iran and Saudi Arabia are somehow practicing Islam incorrectly which would be a simply stupid, self defeating, argument.

The Fact of the matter is that Mohammed was a Terrorist, a Pedophile, a Serial Rapist, & a Serial Murder, he burned other Moslems alive in their Houses for not going to prayer. Do you want to dispute these facts with me?  The scripture about not killing Innocents is distorted through Taqiyya to conceal the fact that Moslems, Christians, and Jews are guilty of not Following Sharia Law which was given to Mohammed by Allah and supersedes all “Man Made Laws”. There will be no reforming of Islam until Sharia Law is banned & the fact of the matter is that Sharia Law is the Core of Islam.

Every person that pays Zakat funds Terrorism.  Every Moslem bank funds Terrorism.  Everybody that does business with a Moslem funds Terrorism.  Saudi Arabia & Iran fund Terrorism.  The entire construction of Islam is a lie & the Quran openly states this.  Islam is not a Religion let alone one of Peace, it is a Tyrannical, Invasive War Cult bent on spreading it’s Rule all over the Planet and submitting every human being to it’s Evil Will.  It is an Insipid, Male only perspective that is intolerant of all other perspectives and allows no dissent. It is antithetical to the Authority of Reason, Tolerance, Variety, & Democratic Values.  Islam is distilled, concentrated, Evil & you are enabler of that Evil.

A takfiri (Arabic: تكفيري‎‎ takfīrī) is a Sunni Muslim who accuses another Muslim (or an adherent of another Abrahamic faith) of apostasy.[1] The accusation itself is called takfir, derived from the word kafir (unbeliever), and is described as when “one who is, or claims to be, a Muslim is declared impure.”[2] Accusing other Muslims of being takfiris has become a sectarian slur, particularly since the outbreak of the Syrian Civil War in 2011.

Apostasy is punishable by death under Sharia Law.