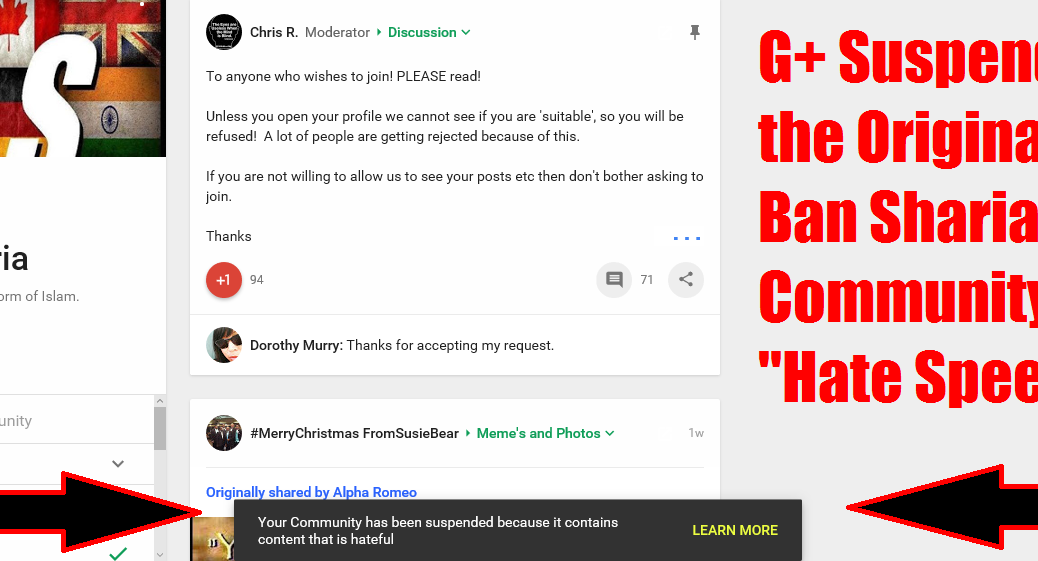 I created the Ban Sharia brand in 2014 in order to explain that Freedom, Justice, Truth and all of the Good in the World was being threatened by Islam. I stated that is Technology & the Corporations didn’t have a bias in favor of the Civilized World that created them they would become agents of their own and our Destruction. Since then my predictions have been coming true one after the other.

Liberal Retards want to act as though every person in the world is an American with Constitutional Rights while at the same time denying Americans the Right to tell the Truth about what Islam teaches, thus violating the First Amendment. This is a rhetorical tautology of Sharia Blasphemy Laws. It is Suicidal & Stupid or Consciously Evil. It demonstrates the Soft Bigotry of Low Expectation that thinks, “Those people are incapable of getting on the level of the rest of the Civilized World so they need somebody to put their Godlike Finger on the scale and tip the odds in their favor.” Of course it helps that rich Mooslems are buying, bribing, and extorting their way into leveraging their influence on these corporations.

I swear to God I saw her wearing a Gold Necklace with Allah’s name in Arabic but every time I tried to rewind my Megyn Kelley show it refused to show me her Muslim Necklace.  What that tells me is that she is being played by Muslim Hillary Clinton supporters that are willing to pay her a lot more than any of us could ever pay her because just like ObamaCare she is a Secret Tax for Stupid People that are willing and able to pay enough money in order to be able to afford her, Disgusting, Over-Used, Moslem Sewer of a Vagina, that she wants to rebrand as Patriotic just like Megyn Kelly and Amy Schumer.

“Drake” is also an abbreviation of Dragon, FYI, as in “Dracula”.  (CLICK HERE FOR MORE INFORMATION)

Exposing the Self Described Illuminati

Immediately after the summit I had my Twitter account deleted, I had 2,500 followers.  I think everybody knows that Mark Zuckerberg has a Moslem bias and has been protecting and promoting islam.  If you say anything true about Islam it is considered hate speech and your account is deleted.  When one of my photoshops went viral on Facebook and got Jon Stewart fired someone sent a worm into Whole Foods network and assassinated the computer I had posted it from.  That demonstrates that if Facebook isn’t working with American cyber espionage units they have their own.  They have been forced to admit that they have been performing psychological experiments on their members, what they haven’t told you is that one of those experiments is an attempt to get people to sympathize with Moslems and mistrust Israelis.

I am warning you ahead of time that Bill Gates is also part of this IslamoNazi psychological warfare and you can trust that he is spying on you as well.  Obama stated that he wanted to have a computer in every house just like Hitler said he wanted to have a car in every garage.  The computer will be made by Microsoft and it will have Windows 10 on it and it will spy on you.  Beyoncé in the Super Bowl half time show said you might be a young black Bill Gates.  In the movie Kingsman Samuel L. Jackson depicted a black Bill Gates who was part of a Global Conspiracy and who spoke to a Black President of the United States about Global Warming and the connection to people.  Obama, and the ideological fascists on the left are insisting that terrorism has nothing to do with the ideology of islam in spite of the fact that the Quran mentions the word specifically repeatedly.

Quran (3:151) – “Soon shall We cast terror into the hearts of the Unbelievers, for that they joined companions with Allah, for which He had sent no authority”.

Narrated Abu Huraira:
Allah’s Apostle said, “I have been sent with the shortest expressions bearing the widest meanings, and I have been made victorious with terror, and while I was sleeping, the keys of the treasures of the world were brought to me and put in my hand.” Abu Huraira added: Allah’s Apostle has left the world and now you, people, are bringing out those treasures. (Sahih Al-Bukhari, Volume 4, Book 52, Number 220)

The fact of the matter is that civilization and Islam can’t live together or at peace with one another because islam is an Imperialistic, Tyrannical, & violent ideology at it’s core.  For those that would argue differently, do you think Saudi Arabia or Iran are practicing islam incorrectly?  Terrorists are not fringe Moslems, they are Orthodox Practicing Moslems.  By the values of islam they are Good Mooslems. 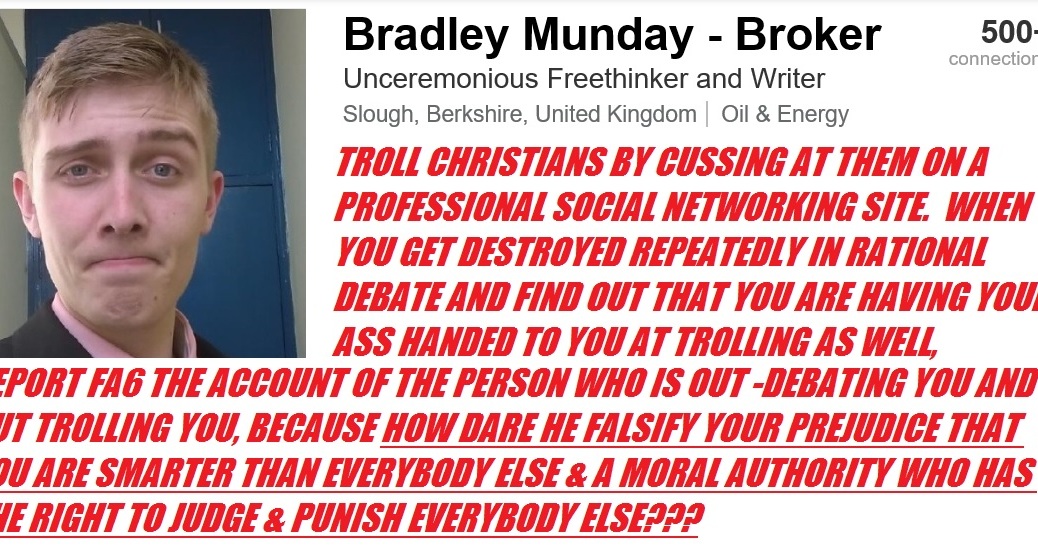 Feel free to report his account by the way…

I have been trying for a while to explain the psychology of Psychopaths, Muslims, & Atheists it doesn’t make sense because it isn’t sane.  So what I will do is document my recent interaction with one of the more notorious atheist trolls on LinkedIn that led to my account being suspended.  While we do this try to wrap your mind around the Liberal Psychosis/Atheist Psychology, we are going to deconstruct their behavior and see how that behavior creates value for them and investigate how it characterizes the people who tacitly agree with this behavior by engaging in it.

Liberals have a reputation for being Tolerant, what we find is this is not the case, for one thing they are intolerant of the opinions of the majority.  Living in a country where variety is accepted and being allowed to dissent or disagree because of it’s democratic nature and values their opinions which they voice abrasively and repeatedly are TOLERATED. How does one mis-categorize something so horribly that when they are the beneficiary of mercy and charity they are considered the source of the benevolence?  But rest assured this is a quality of the Atheist psychosis.  What you find is that in all actuality they are contrarians and they are INTOLERANT of the opinion of the majority.  They operate on the assumption that the enemy of my enemy is my friend and ally themselves with everyone that disagrees with the majority not in order to increase variety and rational conversation but to shut up people that disagree with them and if they can’t get them to change their minds to silence them permanently.

Authoritarianism, is yet another mark of the Liberal Atheist Troll.  Like Muslim’s who think Adam was the first Muslim and all children are born Muslim, Atheists incorrectly argue that all humans are born Atheist, from this perspective they have more authority over your children than you do.  The fact of the matter is that belief in supernatural forces is a cultural universal. ( CULTURAL UNIVERSALS  )  ( PROTO-NARRATIVE & CRIB TALK ) and if you examine the proto-narrative of babies you find that they have imaginary friends and engage in lots of creative dialogue that supports the idea that we are born predisposed to believe in god and anthropomorphize the Universe and Natural Forces.  As all of the shadow syndromes of Liberals, Atheists, and Muslims suggest they are comorbid with psychopathy.  In relationship with their Authority they are interested in expanding it and increasing it because they are social climbers a character of psychopaths.  In order to socially climb they defend their undeservedly good reputations violently.  They need to be thought of as good.

I describe psychopaths as over coddled children because not only do they force the frame that they are good and moral in spite of their actions and intentions, they are enabled by their environments because they are used to getting away with their behavior. and they have reified in themselves their own innate goodness, which means that they always feel that they are good.  These feelings of innate goodness are caused by thinking in terms of the Fundamental Attribution Error, which is thinking in terms of essences, from their perspective they possess the quality of Goodness and exude the essence of goodness as though it is a light that they turn on and off.  This thinking also allows them to forgive themselves for increasing the amount of force in retaliation and stooping to the lowest lows.  Because they are good everything they do is good.  Everything they do to expand their authority and enact their purpose is good.

This undeserved and un-evidenced sense of goodness combined with the Social Climbing nature of an Authoritarian, lets their conscience allow them to trespass natural boundaries and violate the boundaries of person and reason.  Like a toxic parent figure they presuppose their Moral Authority to judge and punish everyone, to fine them or to take their resources and use them against their will.  Indeed when a person argues for mercy and charity they are usually not using their own resources they are asking for another group of people to use their resources for the benefit of another group of people at no risk to themselves or their own resources and only in so far as it increases their benevolent reputation.

More interesting is that the virtues Bradley perceives himself as having being an “Unceremonious Free Thinker & Writer” those do not extend themselves to being virtues if the opinion expressed disagrees with his or if his behavior is being documented or if he is being falsified in rational debate and can no longer defend his positions or conceal his rhetoric.  This necessitates his attacking the existence of the person who is demonstrating Sapiential Authority over him, by reporting their profile without warning.  Psychopaths always attack first, they have to attack, they can’t not attack.  If you are to defend, or even if you are to best them with a counter-attack this gives them permission in their minds to redouble the amount of force they use and to attack in more evil and underhanded ways in order to accomplish their evil purpose.

Oh yeah one more thing, he reported my account last night after I responded to his trolling a Christian with a link to this blog take a look at number 10, lol:  CLICK HERE FOR “SAVING AMERICA” BLOG