If the Alternative Right exists then by definition the Alternative Left exists.  This might be the Stupidest Blunder Hillary Clinton has made this far in her Campaign.  Not only is she a Terrible Human Being she is Horrible at Campaigning.  No matter what she does she can’t conceal what an Unlikable Person she is in Reality.

The Truth of the Matter is that ISIS is praying to Allah because they are Moslem and they do worship the same God as Islam, but they aren’t praying for Donald Trump to be elected President they are praying for Hillary Clinton because if she is elected they will be able to come into the Country and kill Americans, the Greatest force of Moral Evolution on Planet Earth.

In most accounts we have heard that a sex slave that Mohammed kidnapped was put in charge of preparing his food and she poisoned him and then it took him several years to die.  There is no evidence to suggest that Mohammed died a slow death over a long period of time, history suggests that he died very quickly with almost no warning.  Since Mohammed died Islam has been perpetually at war with itself.

The Shi’a view of Aisha is generally unfavourable. This is primarily due to what they see as her contempt for the Ahl al-Bayt (the Islamic prophet Muhammad‘s family) and her attempts to stir up the fitnah (civil war) of the time. Her participation in the Battle of Jamal is widely considered her most significant sign of such contempt. They also do not believe that she conducted herself in an appropriate manner in her role as Muhammad’s wife. Several prominent Shia accounts even report that she, along with Hafsa, brought about Muhammad’s death by giving him poison.[1]

Shi’a also consider Aisha to be a controversial figure because of her political involvement during her lifetime. Aisha came from a political family lineage, as she was the daughter of caliph Abu Bakr. Aisha also played an active role in Muhammad’s political life; she was known to accompany him to wars, where she learned military skills, such as initiating pre-war negotiations between combatants, conducting battles, and ending wars.  (SOURCE)

ISIS, the Islamic State is Sunni.

It is common practice in Islam and the Arabic culture, because of the Innate arrogance and feelings of superiority, to conceal embarrassing truths with unrepentant lying.  It is completely consistent with the Moslem Psychological profile to attempt to polish the reputation of their Prophet and his 6 year old wife.  Historians have pointed out that it would make no sense for Mohammed to put a newly conquered sex slave who’s husband and family he had murdered in charge of preparing his food.  Prominent Shi’a scholars have stated that it was Aisha herself that poisoned Mohammed and that she didn’t properly fulfill her wifely duties.  (SOURCE)

Obama created the power vacuum that allowed the Islamic State to take over the formerly Shi’a Iraq.  His friend in Turkey, Erdogan, allowed people into Syria from all over Europe to join ISIS.  Obama refused to refer to them as “ISIS” in order to deny their existence in Syria even though that is what they called themselves.  It is a well known fact that Obama has been fighting a Proxy war with Russia via the civil War in Syria.  Now we know that Hillary Clinton was responsible for selling guns via Benghazi for the proxy war in Syria against Assad which became ISIS (that is what WikiLeaks is telling us) .

This is the problem that we have with career politicians they think we are stupid so they try to solve problems quietly behind closed doors and then when everything blows up in their faces they act like they had nothing to do with it.  That isn’t the worst part though, as always it is we that have to pay for their stupidity and their meddling, not only with our money, but with our lives, our safety, and the Quality of our lives.

Obama wants Neighborhoods to Police themselves.  Obama doesn’t want the State Police to appear to be an “Occupying Army”. What is Obama’s Hidden Agenda?

When Police aren’t allowed to enforce the Values & Social Contract of that State you get pockets of Corruption.  Mafia’s and other Consciously Evil Intelligent organizations take over and force people to pay them protection taxes (Extortion).  They enforce their own Authority with Physical Violence, Intimidation, Sabotage of Business & Destruction of Property.  With the power vacuum he intends to create, “Sharia Police” would fill the gap & force the so-called Peaceful Moslems to conform to their will and not just them, any unfortunate Non-Moslems that happened to live in or near their ever expanding little Caliphate on American Soil.  Obama knows this, he never stopped being a Community Organizer. Obama is attempting to destroy America from the inside out, while George Soros and the Moslem Biased, Israel hating, United Nations attempt to destroy us from the outside in. 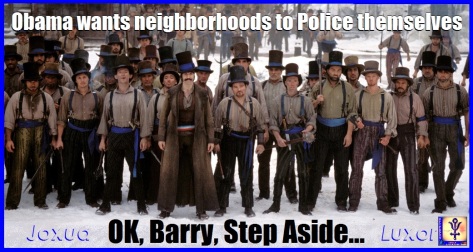 The Melting Pot is Broken

Sir Francis Bacon correctly asserted that one of the causes of Atheism is too many Religions.  I would suggest that one of the causes of Anarchy is Multiculturalism.  Massive immigration isn’t designed to integrate people into a society, it is designed to subvert a culture’s unified values.  A Moslem’s desire to kill or convert every human being, isn’t equal to my Value that all people should be free & equal under reason.  Groups of people that exert an influence on their own members in the form of Trauma based Mind Control do not integrate into societies as has been demonstrated all across Europe.  Every group of Immigrants that came to America was jumped in and we exerted an influence on them to become American.  We dismantled and imprisoned their mafias.  Obama & Clinton are openly coordinating with the Moslem Mafia, and the Black Ghetto Mafias.  As Obama did with ISIS he is giving them a Safe Space to fester and perfect their Terrorist Strategies.  Obama is consciously reproducing the failure that he observed in Chicago and the failure of Multiculturalism in Europe in the United States of America in order to Destroy US.

Transversely, if Obama Federalizes the Police, removes American Sovereignty, and Empowers the Moslem biased United Nations.  They would have a bias in favor of Islam & Moslems and there would be nothing we could do about it.  If you don’t feel represented now just wait until your President lives on another continent.  The Founding Fathers preferred the Survival of the States to the Survival of the Nation.  Evolution prepares us for Survival not by homogenization (making us all similar with the same strengths and weakness) but through diversification, this is why Fascism always fails.  It is a form of Philosophical Inbreeding that is blind to it’s own ever increasing Frailties.

We the People Must Stand Up

Take our Nation Back. 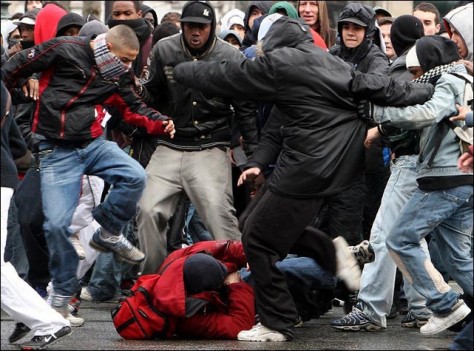 I have lost all respect for Mark Levin. Everybody knew the Roll Call vote was a Trojan Horse for Ted Cruz’ shadow campaign. Mark denied this saying that the Grass Roots people had been silenced and this was undemocratic.  The Sour Grape One concealed the fact that they didn’t have the states to get a Roll Call Vote.  This is the same Idiot that was arguing that Ted Cruz wasn’t taking advantage of the Rules by stealing Delegates he was using the Rules that Trump was ignorant of, completely disregarding the Spirit of the Rules.  Now he’s arguing that they have the right to be offended because their voices weren’t heard and that they aren’t being included.  Unless they get everything they want they refuse to be included, that isn’t democracy Levinstein, that is some Neocon, Totalitarian Horse 5hit. And just to set everything in stone, Ted Cruz gets up and tells people to “vote their conscience” showing he was using the Roll Call vote as a Trojan Horse for his Shadow Campaign.  Fortunately for us the Cruz Crew had more loyalty than the Bernie or Bust people.