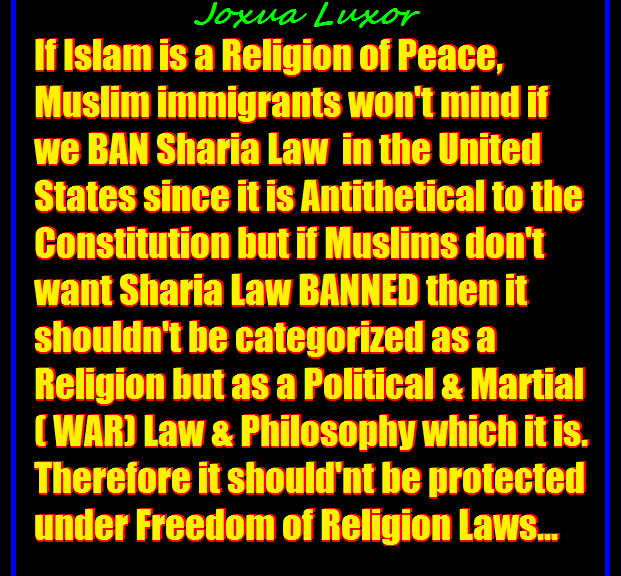 Peaceful Muslims shouldn’t have a problem with having Sharia Law Banned, Hillary and Barack ignore this topic because they know Muslims won’t tolerate it and they are attempting to create a Global IslamoNazi Revolution, Create a Permanent Ruling Class & Slave Class, and Empower the United Nations.  If you think you aren’t being represented by Politicians now, just wait until they are safely living on another Continent, in a Fortress, in a Muslim Country and your Nations Sovereignty has been subjugated to that of the Muslim biased United Nations.

As a psycholinguist, & a profiler I can tell you that even Pathologically lying Psychopaths won’t lie overtly if they don’t have to.  They instead use different strategies to deflect, change the subject, or dismiss the question.  We are going to examine Ted Cruz’ interesting response to the suggestion that his father knew Lee Harvey Oswald.

Ted Cruz first says, “This man is a Pathological Liar.”  Not a denial.  He is attacking the character of the person who brought up the subject.  Trump merely asked why Ted Cruz hadn’t responded to the article in The National Enquirer and what was the nature of the relationship between Lee Harvey Oswald and Rafael Eduardo Cruz Senior.  I can tell you personally that I ran across this photo and this question MONTHS before it was published in the Enquirer.  Ted Cruz continues, “Donald’s source for this is the National Enquirer. The Enquirer is tabloid trash.” Not a denial.  This is a tacit appeal to the character of the magazine, it isn’t an assertion that his father wasn’t an associate of Oswald’s. “Donald Trump alleges that my dad was involved in assassinating JFK.”  Not a denial. And this is in fact not what Donald Trump said.

“Now let’s be clear, this is nuts.  This is not a reasonable position, this is just cooky. While I’m at it I guess I should admit, ‘Yes my dad killed JFK, he is secretly Elvis, and Jimmy Hoffa is buried in the back yard.'” The first statement is what caught my attention.  This appears to be a Lying technique known as “Telling the Truth Falsely.” The Liar sarcastically or humorously tells the truth as though he was exaggerating a Falsehood.  Upon closer examination you realize that he isn’t mocking specifically what Donald Trump said.  The accusation was that Rafael Cruz Senior knew Lee Harvey Oswald and that begs the question what the nature of their relationship was.  The next two assertions are intentionally absurd and they are intended to invite people to assume that the first assertion is equally absurd.  This is known as the Fundamental Attribution Error or thinking in terms of essences.  The Absurd-ness of the last to hyperboles is supposed to taint the first subject.  I have stated before that Ted Cruz is supposed to be a World Class debater but I have only ever seen him use his alleged intellectual prowess to manipulate people and obfuscate the issue, I have never seen him use it to clarify the issue or even really to educate people.  He is one of the most strategic and manipulative communicators I have ever seen and he takes fiendish, vindictive, delight in what he considers his Mind-blowing turn of phrase and his rapier wit. Hoist with his own Petard he finally went full Retard and jumped the Shark. 🙂

I think his Campaign later issued a denial shortly before he suspended his campaign.  Later in that same press conference he quoted Donald and suggested that had Sexually Transmitted Diseases, which was the exact opposite of the point Trump was making.  He went on to suggest that Trump “is an unapologetic serial philanderer.”  Which leads the listener to believe that Donald is CURRENTLY cheating on his wife and conflates Young Donald Trump with Mature Donald Trump and demonstrates an ignorance of how time works.  I might also point out that Ted Cruz could not state that he had always been faithful to Heidi Cruz he instead had the Bride of Frankenstein, Carly Fiorina interrupt and hijack the conversation.  Assuming that Cruz has indeed cheated on Heidi that would mean the difference between himself and his accusation is that he, Ted Cruz, has apologized for his Philandering and that would mean only that he admitted it to Heidi, but that doesn’t mean the events cease to exist.  Which in turn means Ted Cruz is concealing those happenstances or intentionally lying about their occurrence because he feels that the Lord (Himself, because he has a Messiah Complex & Delusions of Grandeur) has forgiven him for his shortcomings.

I know that you know who I am Ted.  When you idiot friend kicked me out of your crappy G+ group you started lurking my blog and using my talking points.  If you wanted me on your team you should have offered me a job instead of plagiarizing my philosophical calculus.  I bet you wish you hadn’t underestimated me now, don’t you? 😉

You aren’t fooling anyone you fat Pawn.

You keep on saying nothing untoward is going on but you are lying.